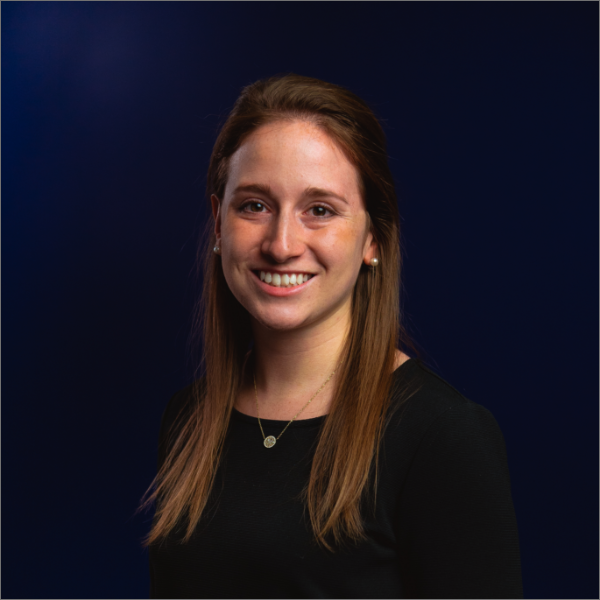 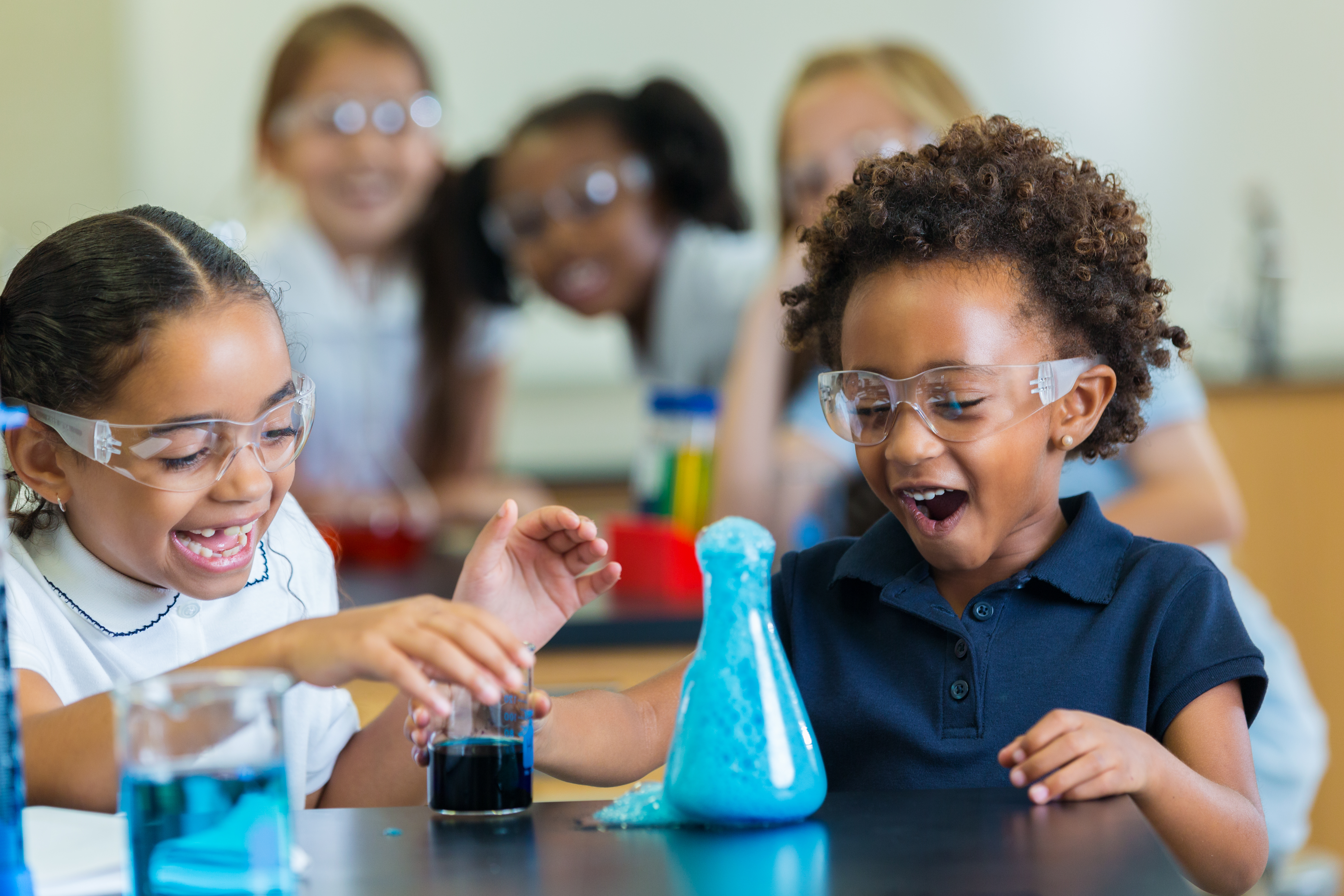 It’s no secret that HubSpot boasts one of the most user-friendly and intuitive marketing and communications platforms on the market. But HubSpot isn’t branded as a platform made for education marketing or the admissions world. In fact, HubSpot is completely industry-agnostic, and their clientele range from software companies to yoga instructors to major universities.

That might make you think that HubSpot wouldn’t have the infrastructure needed to support your admissions team for ongoing student recruitment. After all, K-12 recruitment is unique from other industries in that your market audience involves two layers; the parents of potential candidates and secondarily, the candidates themselves.

But we’re going to walk through exactly how to set up a customized HubSpot framework for your K-12 school that accounts for both your prospective parents and candidates, using a tool called the deal pipeline — or as we call it, the admissions pipeline.

What is HubSpot’s deal pipeline?

The deal pipeline is an admissions tool in which deals represent enrollment opportunities. Those deals can be moved down the pipeline through the various deal stages to signify that the opportunity is moving closer towards closing. The pipeline is meant to begin where the marketing funnel ends.

You can create multiple pipelines to represent each academic year.

Distinguishing contacts from deals on HubSpot

Like we mentioned earlier, K-12 enrollment marketing is multi-faceted and should account for both the prospective parent and the prospective candidate(s). The way to do that within HubSpot’s ecosystem is to have both populations live in separate objects; parents live in HubSpot’s CONTACT database and candidates live in the DEALS database.

HubSpot contacts make up your marketing audience — meaning that your prospective parents should be receiving event invitations and content offers. As soon as the parent contact provides sufficient candidate information about one or more of their children, a deal is subsequently created for each candidate. 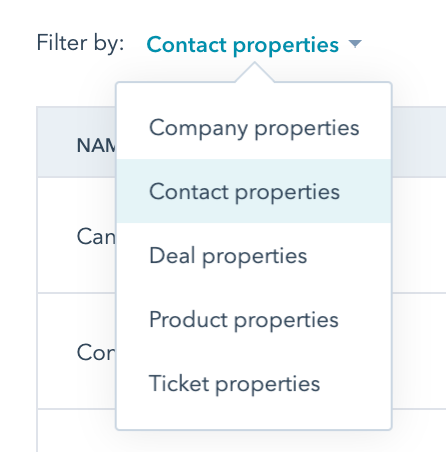 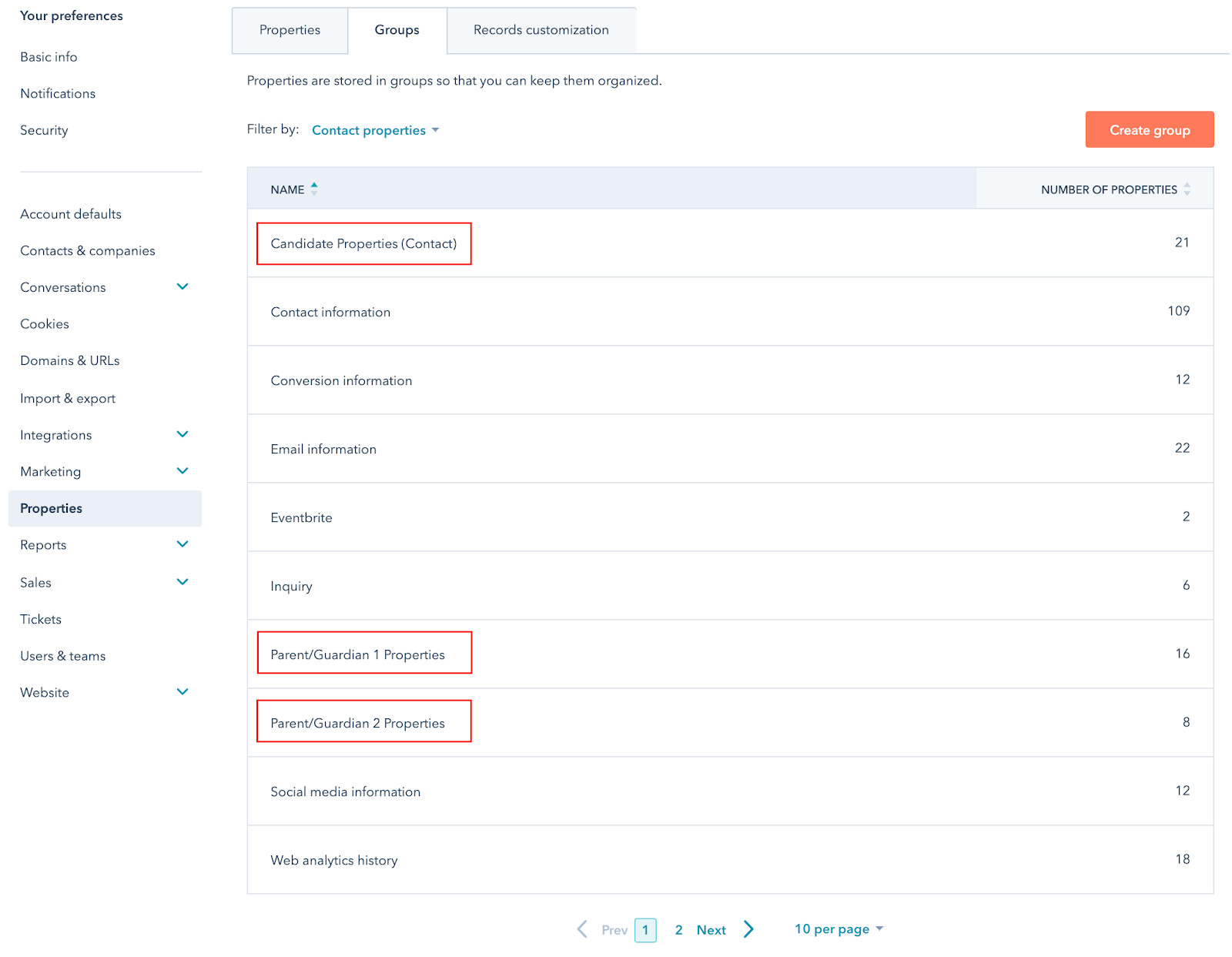 If you use any forms that collect information for both parents/guardians, you’ll want to add a Parent/Guardian 2 Properties that live under the master contact record as well. 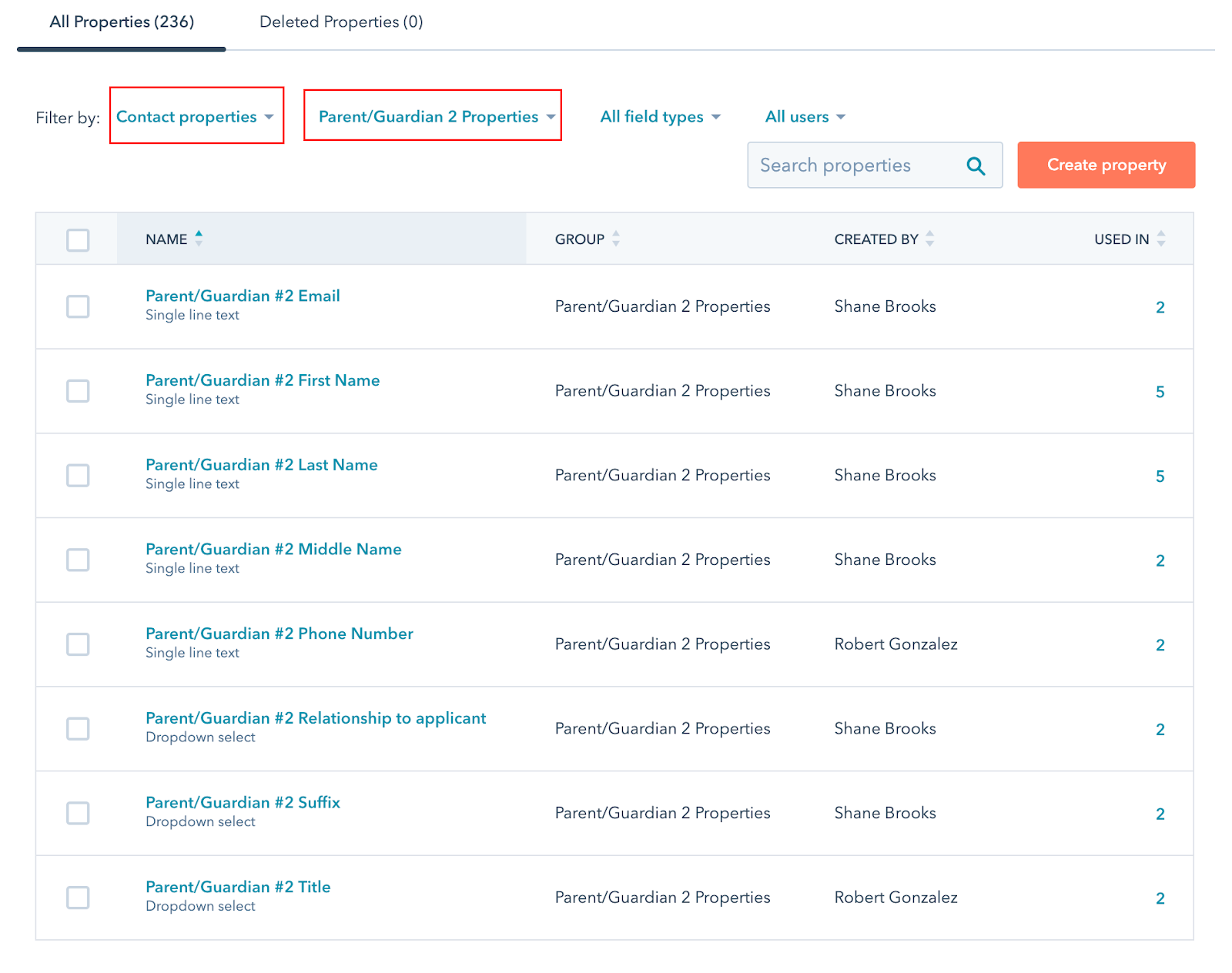 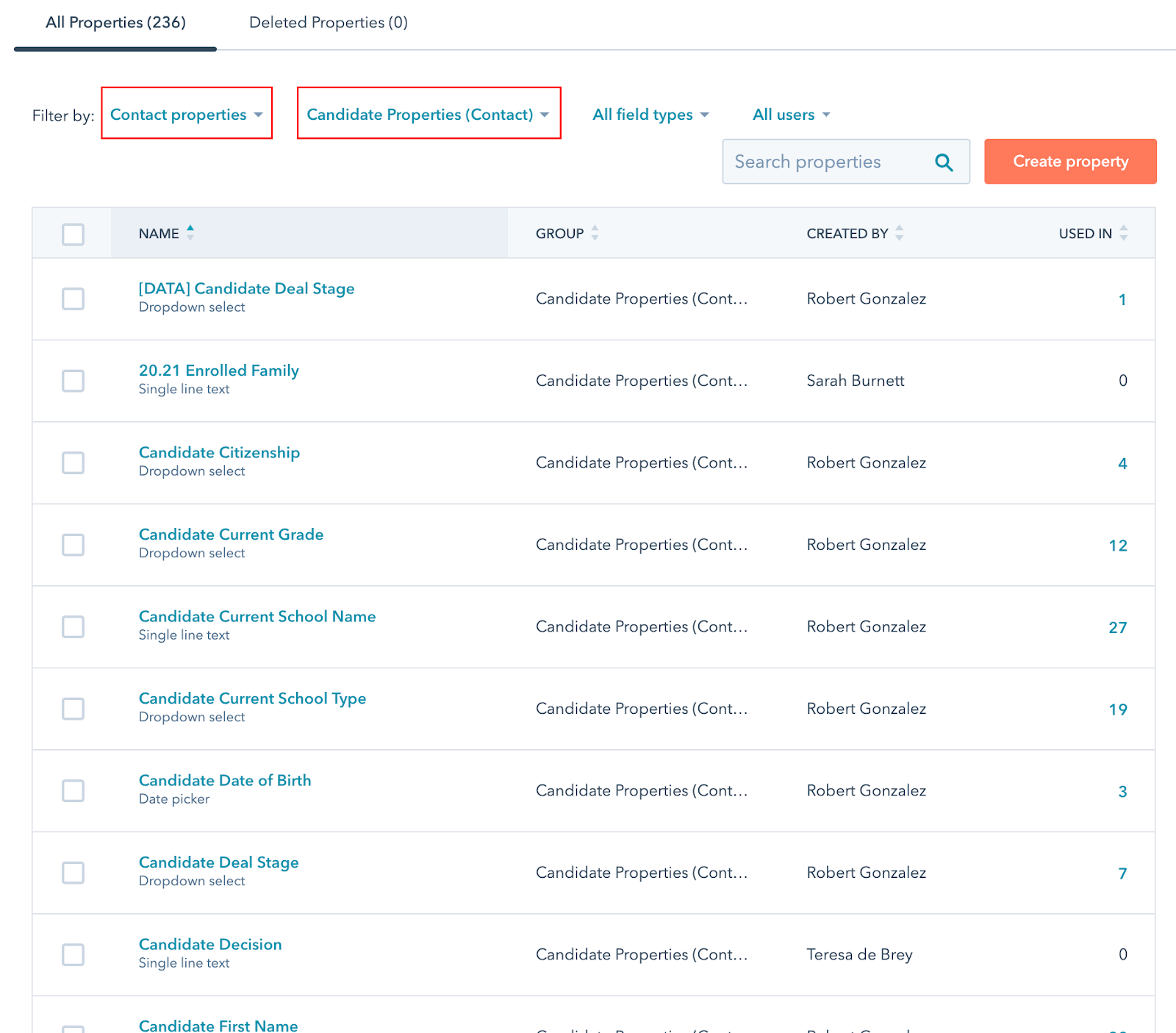 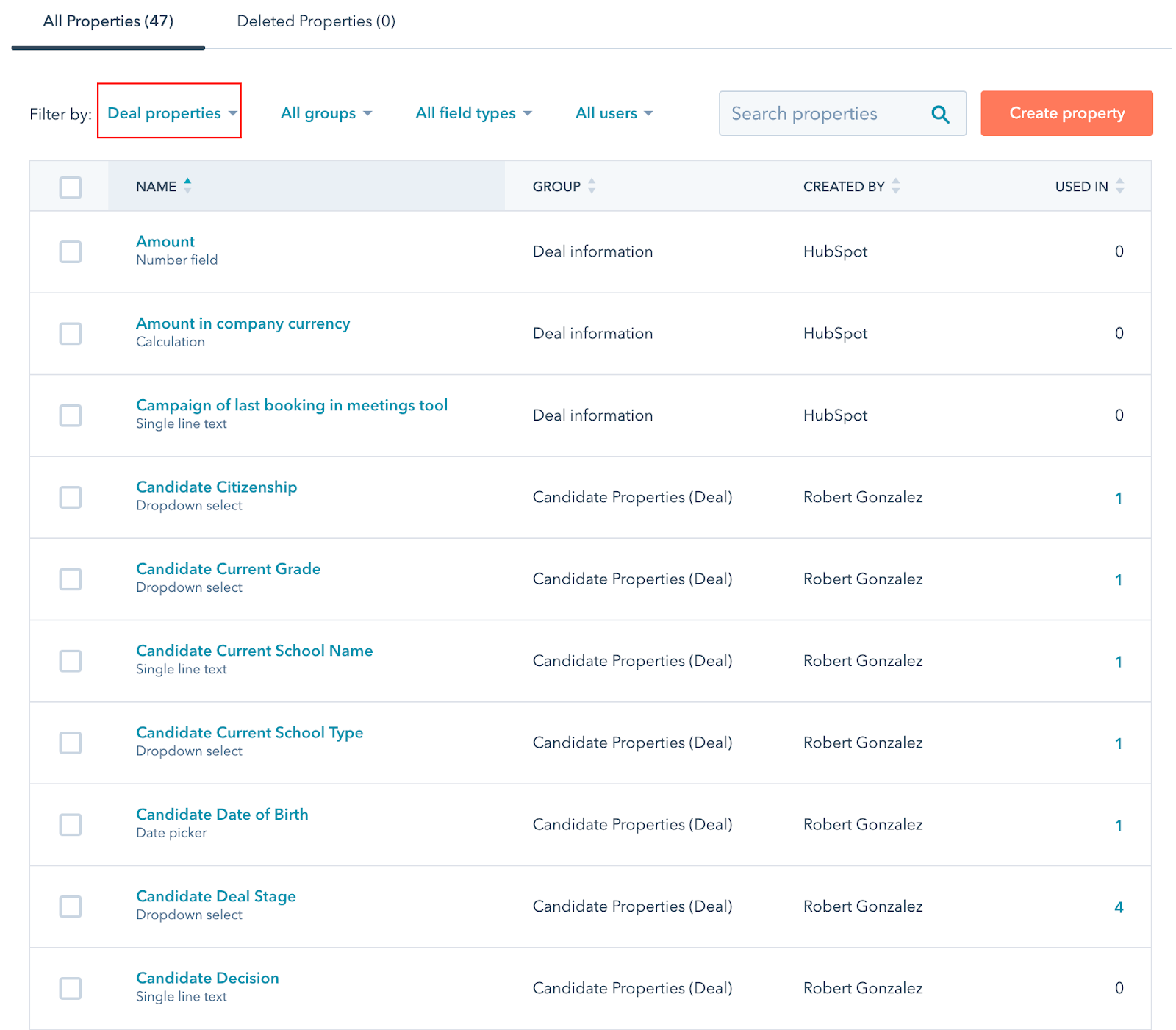 Whether you’ve got ten or two people on your admissions team, you can use HubSpot workflows to automatically assign contacts and deals within your database to individual admissions counselors.

HubSpot has a default property called Contact Owner which can be used to indicate admissions counselor assignments. Using workflows, you can set certain criteria to determine which counselors are assigned. For example, you could select counselors based on candidate grade of interest: 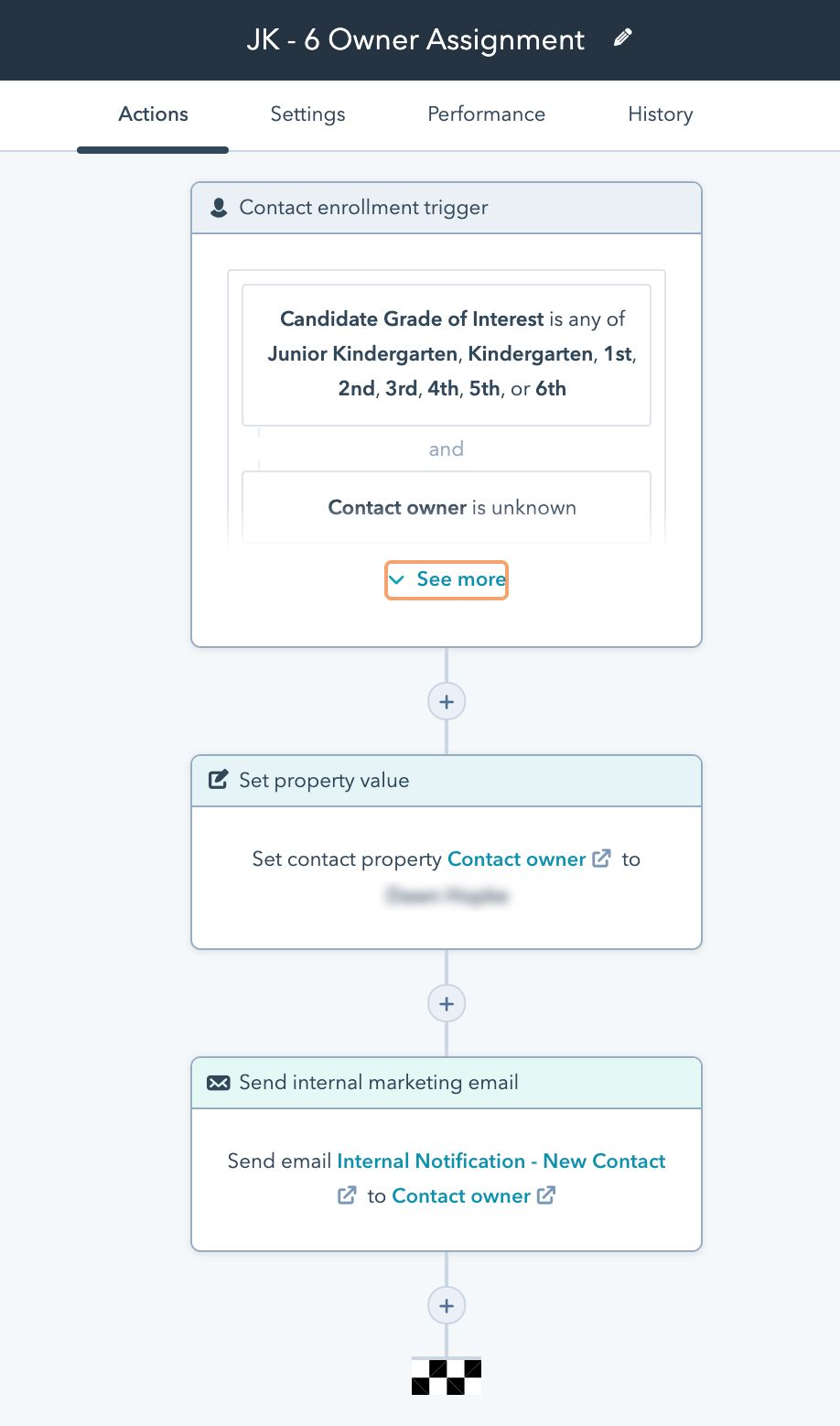 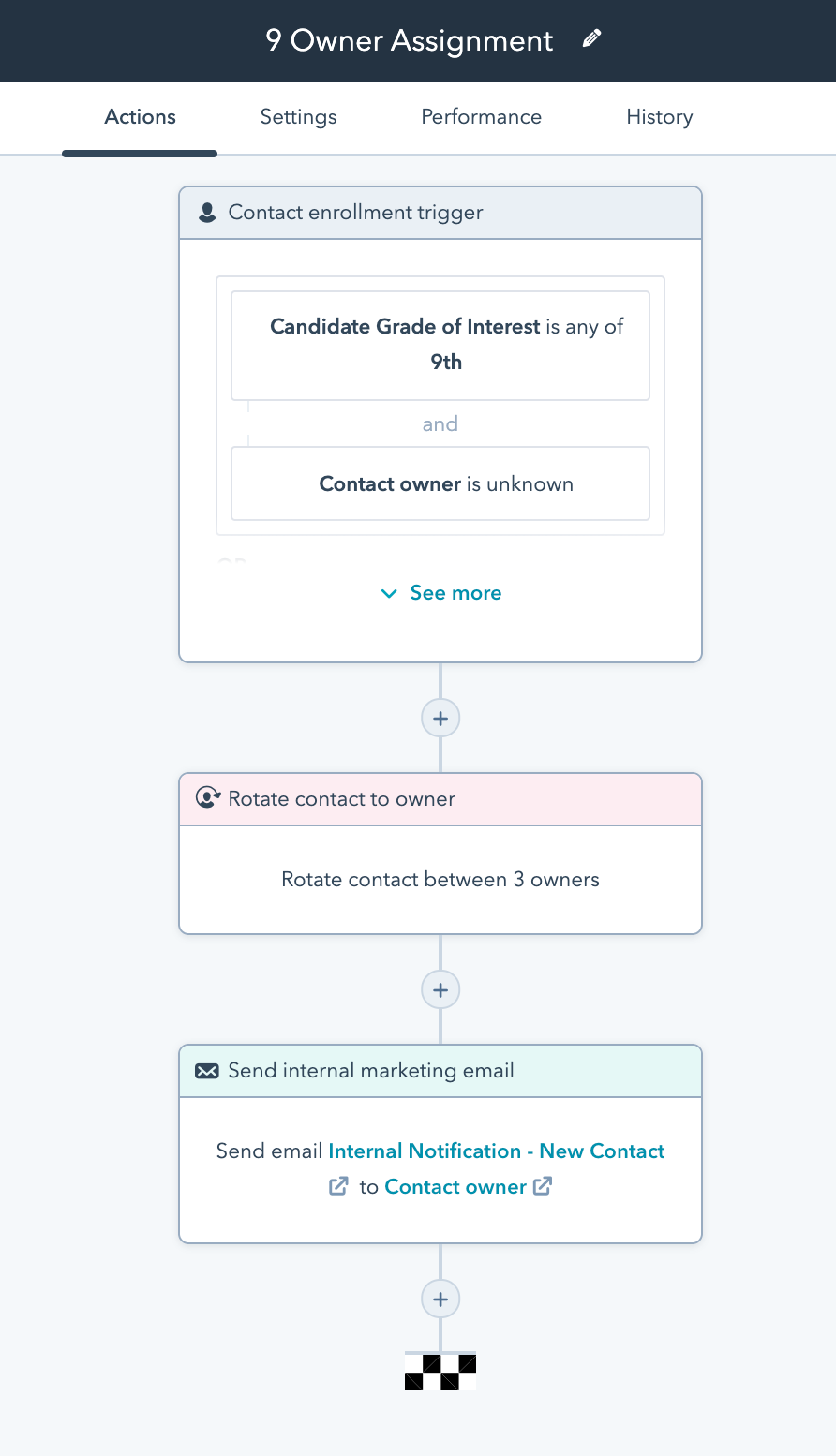 Within your deal creation workflow (which we’ll review in more detail later), you can carry over the contact’s deal owner to become the deal’s owner as well: 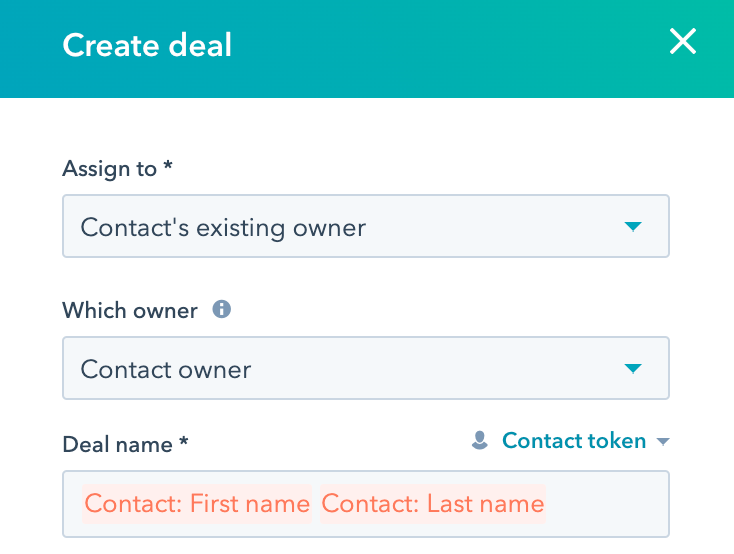 Setting up your HubSpot deal pipeline

You can set up and customize your pipelines under the deal settings. This is where you should create a pipeline for each academic cycle and determine what your deal stages will be. 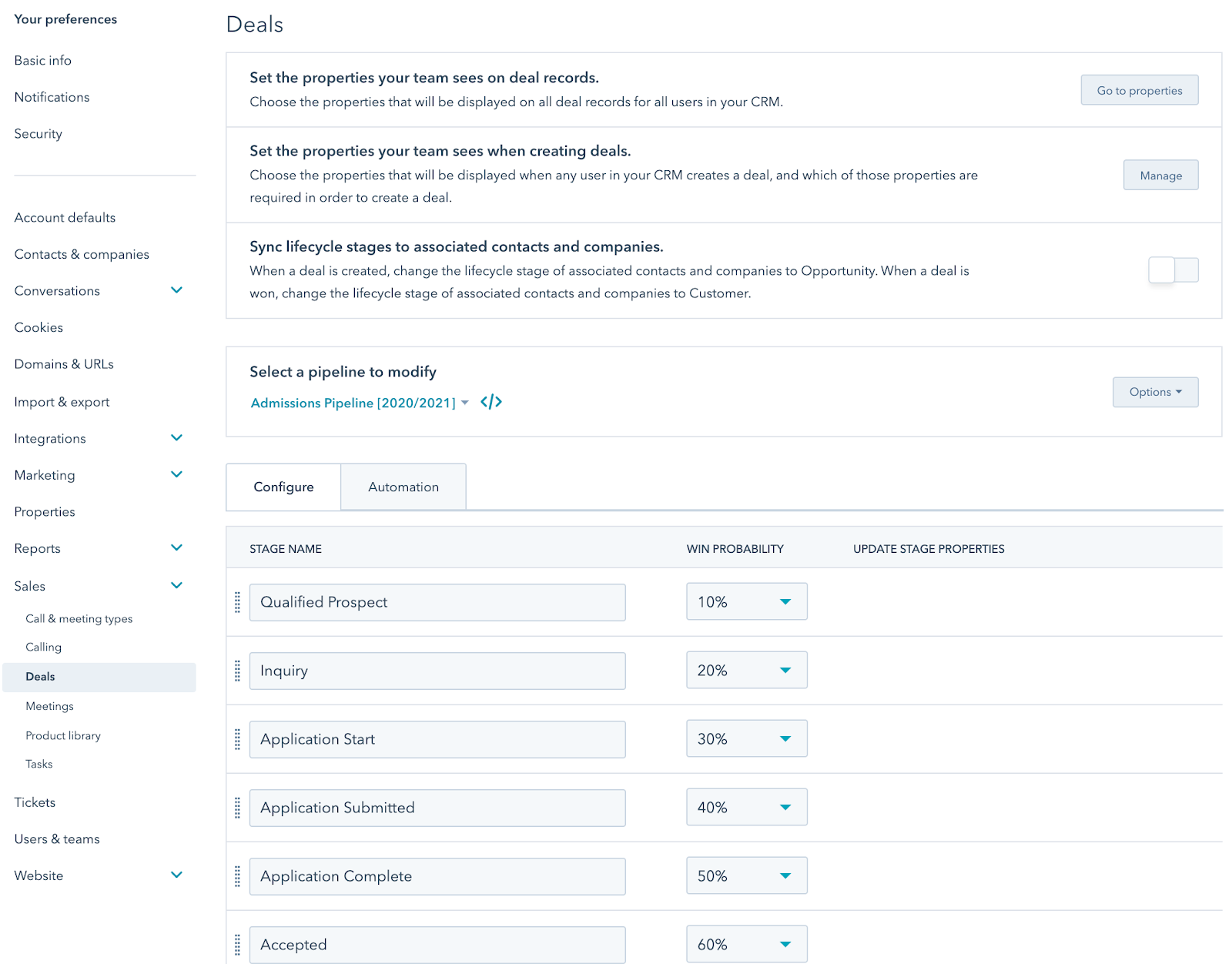 Using HubSpot workflows, you’ll need to create a deal creation workflow that automatically triggers the creation of deals within the pipeline, and to do so, you need to determine what your enrollment criteria will be. In other words, what’s the minimum candidate criteria your admissions team needs in order to consider a prospective candidate as qualified.

For example, one school determined that deal creation should occur once a parent shares their candidate’s first name, last name, grade of interest, and proposed entry year to the school. 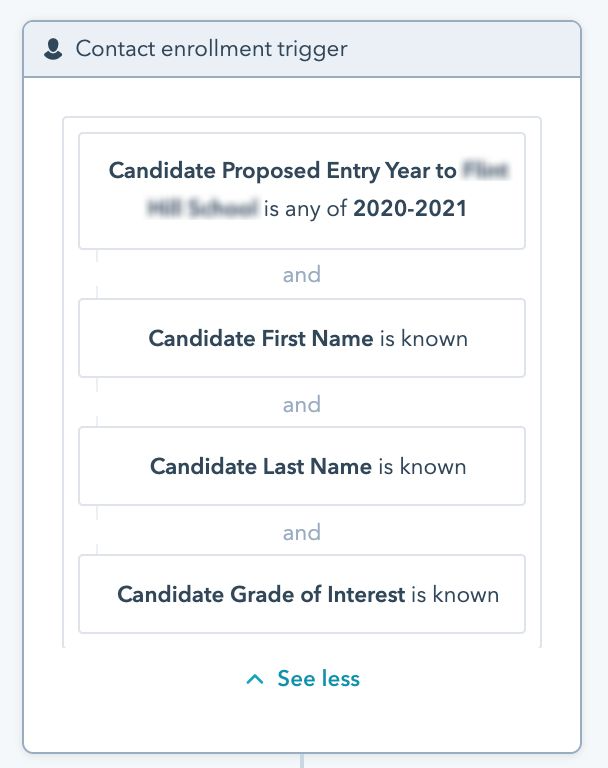 Once those four contact properties are known, the workflow enrolls that contact and uses those candidate properties to create a new deal in the deal stage of your choice, and the parent contact record is associated with the deal whose creation it triggered.

Let’s go over a few scenarios to recap…

Imagine you have three types of forms that live in HubSpot for (1) webinar registration, (2) in-person event registration, and (3) inquiry. If we were to rank those three forms in order of interest level of the prospect, we can (hopefully) all agree that someone who fills out an official inquiry form is likely to be more serious about your school than someone who registers for an event, and somebody who registers for an in-person event is likely more interested than a webinar RSVP.

The varying degrees of commitment level should be reflected in the number of fields used on those forms. The higher the prospect interest, the more fields you should have, because more serious candidates will be willing to offer more data about themselves.  So, let’s say your webinar registration form only requires parent first name, last name, and email, while your in-person event registration form includes those three parent fields plus some candidate information, while the inquiry form requires fields for both parent/guardians and for the candidate(s). 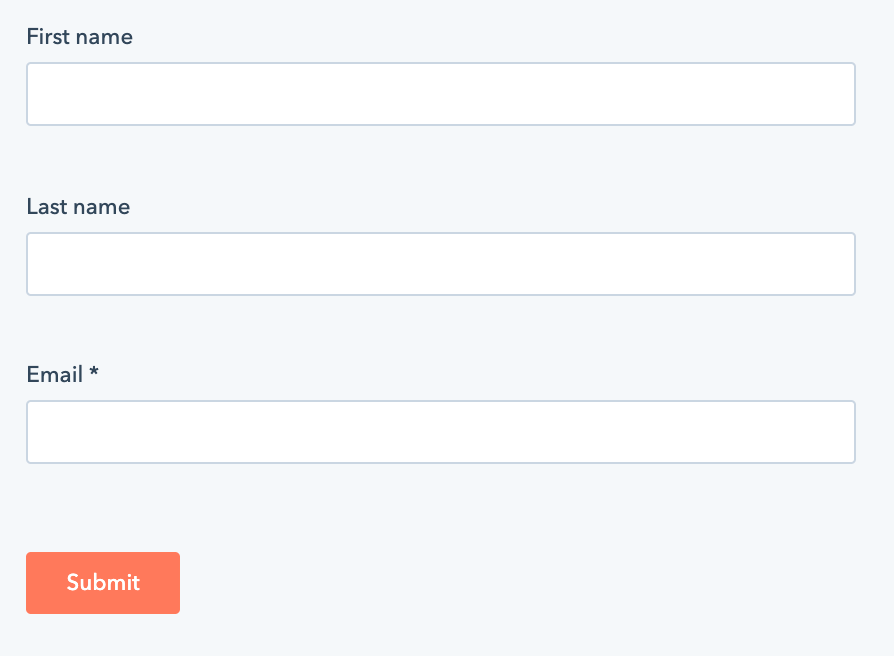 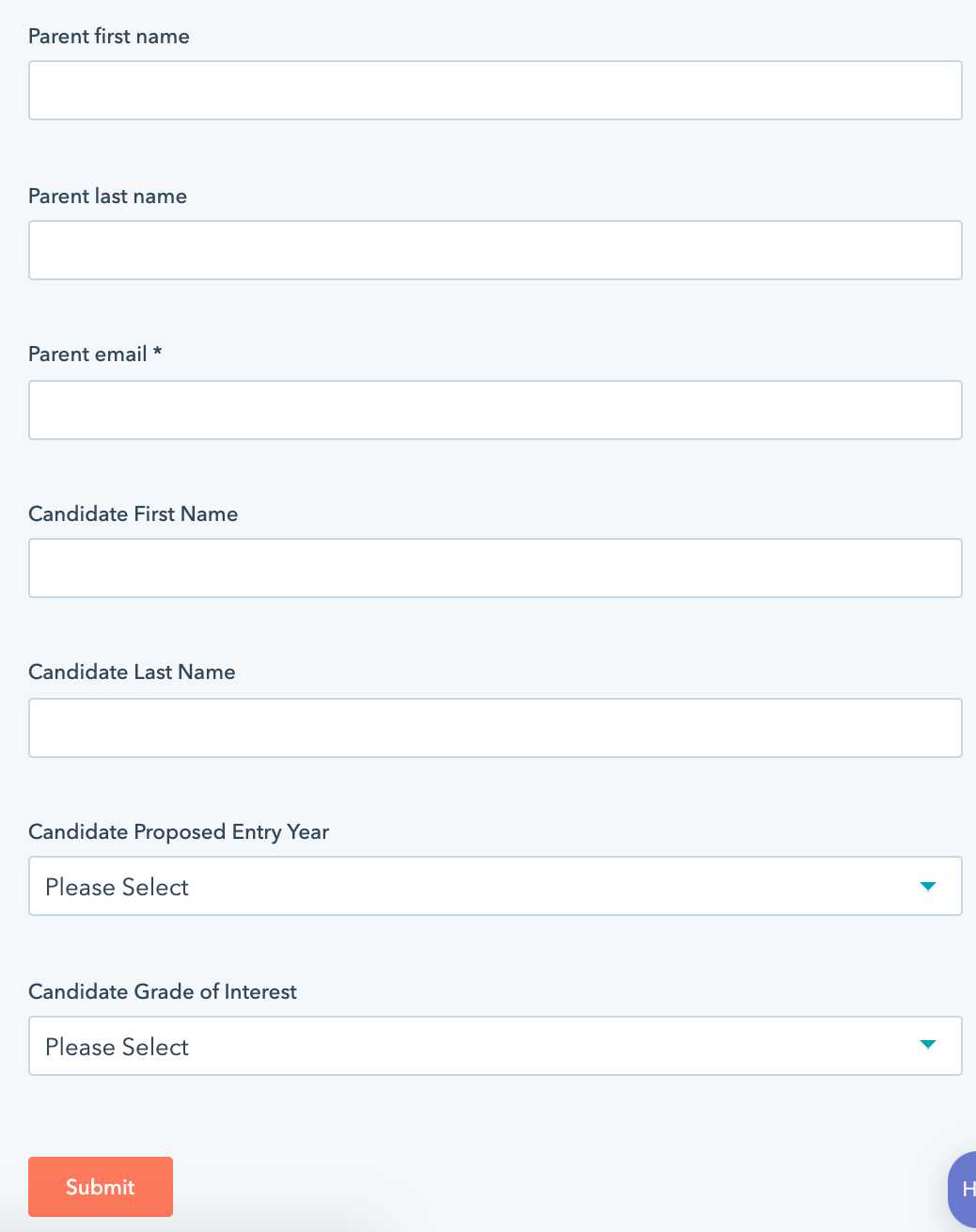 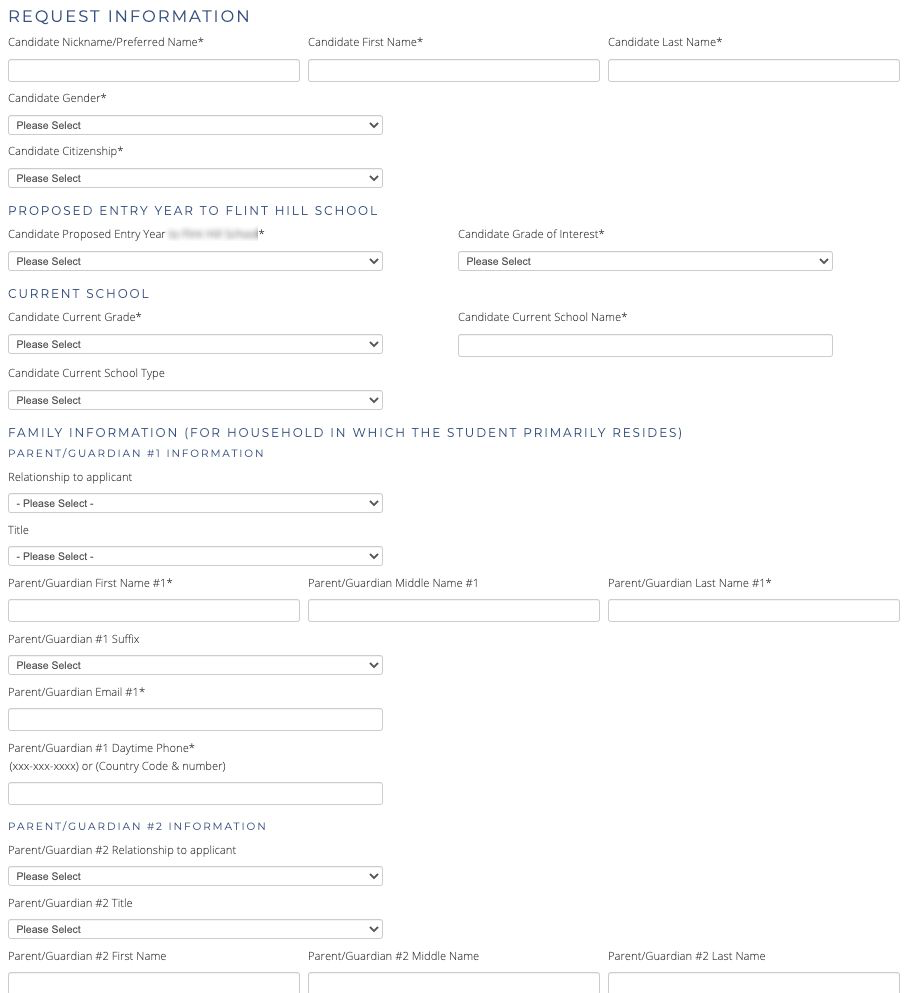 Scenario #1: If Sally registers for a webinar, a contact will be created for Sally (if one doesn’t already exist) using the three properties in the webinar form, but a deal will NOT be created since the form doesn’t include any candidate properties.

Scenario #2: If John registers for an in-person event, a contact will be created for John (if one doesn’t already exist) using the seven properties in the form, and a deal WILL be created since the form requires the submission of all four Core Candidate Properties. John’s contact record will also be associated with the deal that was created.

Scenario #3: If Jennifer submits an official inquiry which includes numerous fields for parent/guardian 1, parent/guardian 2, and candidate info, one contact will be created for Jennifer (if one doesn’t already exist), and under Jennifer’s contact records will live the data she submitted for parent/guardian 2 and her candidate(s). Additionally, a deal WILL be created since the form requires all four Core Candidate Properties, and Jennifer’s contact record will also be associated with the deal that was created.

We’ve mentioned a few times the notion of association between parents and candidates, but what does that actually look like, and how do you keep track of the parent-to-candidate relationship?

Frank is a prospective parent who submitted an inquiry for his two kids, Mark and Luke. Let’s take a look at Frank’s contact history...

He submits the inquiry form:

Two unique deals for his two sons are subsequently created:

On the left hand menu, you’ll see a few contact properties at quick glance, including Frank’s contact owner (or admissions counselor), HubSpot score, email, etc. In the middle, you have the option to scroll through his entire activity history, from page views to form submissions to deals created. Finally, on the right-hand menu, you see a list of his two associated deals, Mark and Luke. Here, you can click for more details on each deal or even change their deal stage: 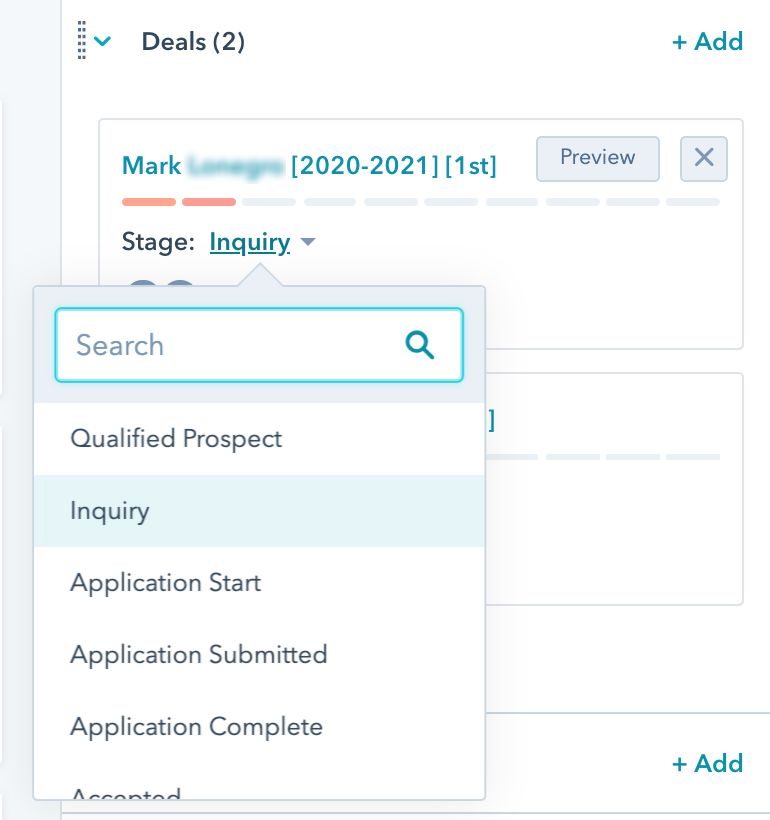 You can also click “Add” in the upper right hand corner to quickly add other deals or manually create a new deal to be associated with the parent contact: 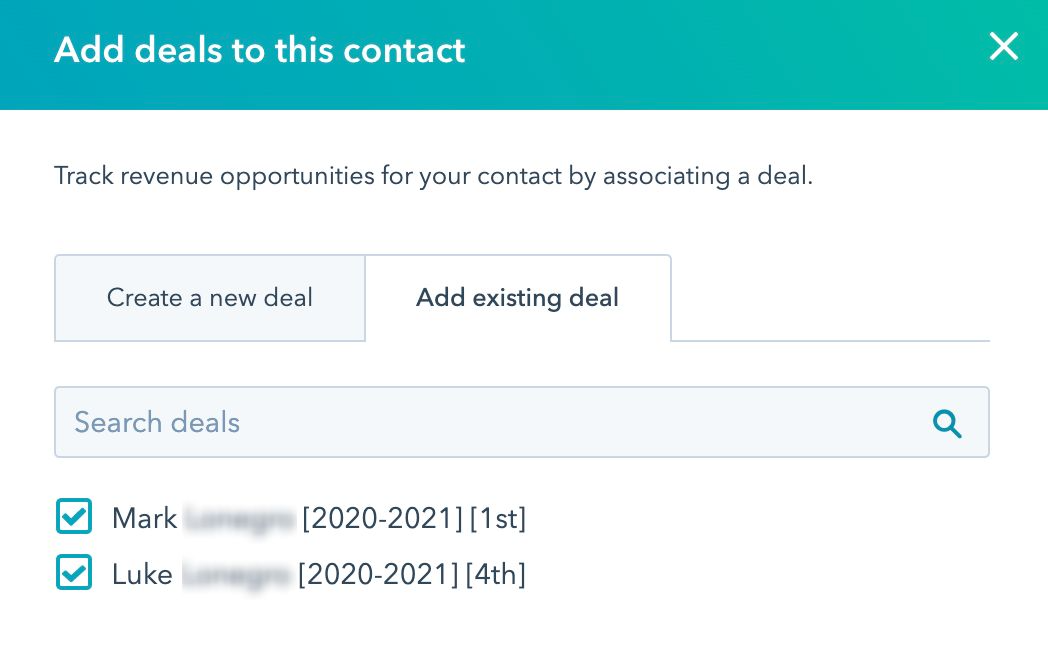 By the way, Frank’s wife, Kristin, also has a separate contact record that’s associated with Mark’s and Luke’s deals as well:

Now, let’s take a look starting from the deal record:

You’re in your deal pipeline and search for Mark’s and Luke’s deals, and you click into Luke’s deal: 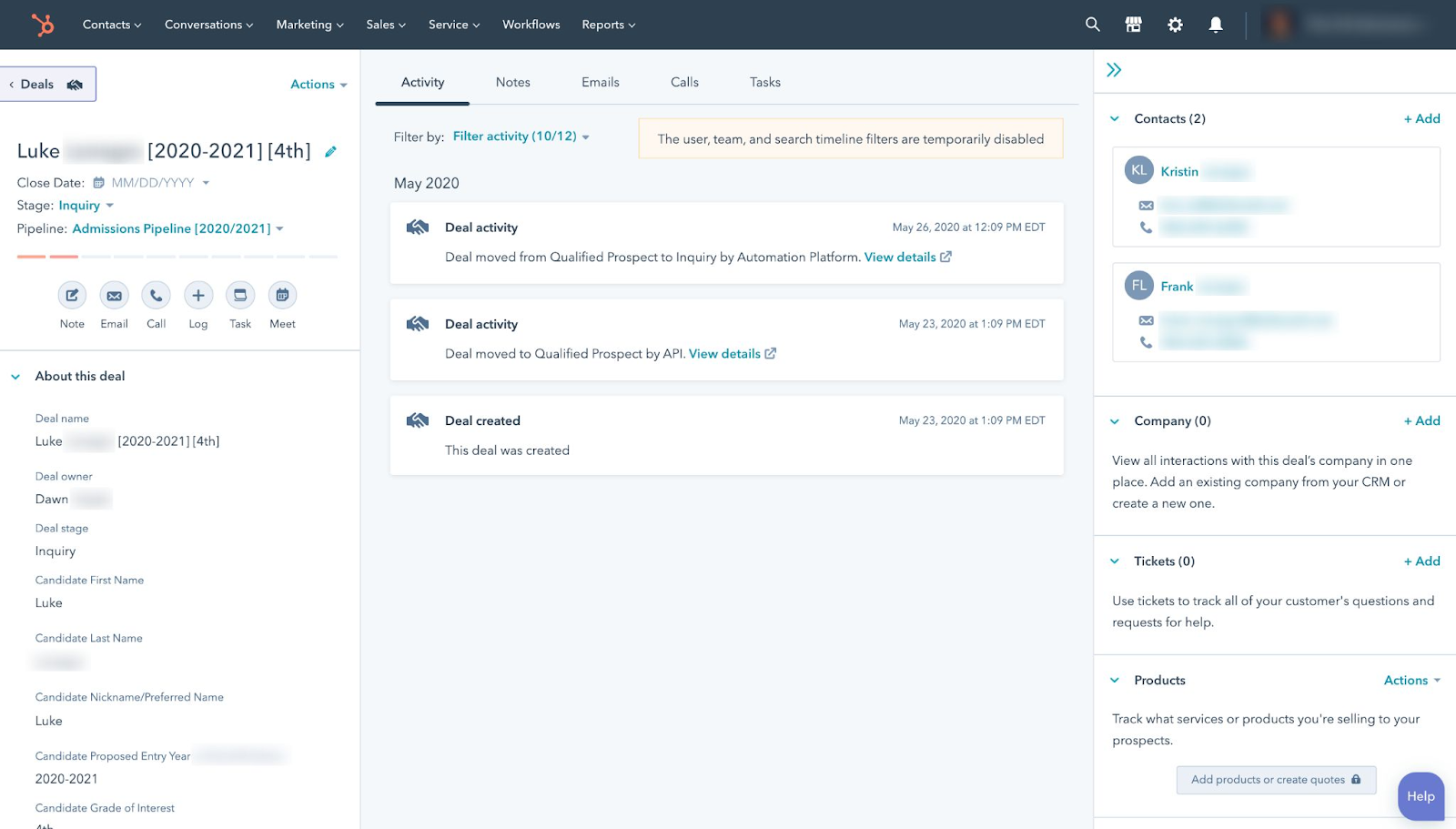 You’ll notice that the deal detail view resembles the contact detail view. There’s a left hand view with a few deal properties, deal behavior history in the middle, and on the right, you’ll see the two associated contacts, Kristin and Frank. Again, you can click into Kristin’s and Frank’s contact history for more details.

Note that HubSpot only allows for automatic contact-to-deal association upon creation of the deal. So, once a deal is created and you’d like to associate it with parent/guardian 2, you’ll have to do so manually by hitting Add in the upper right hand corner: 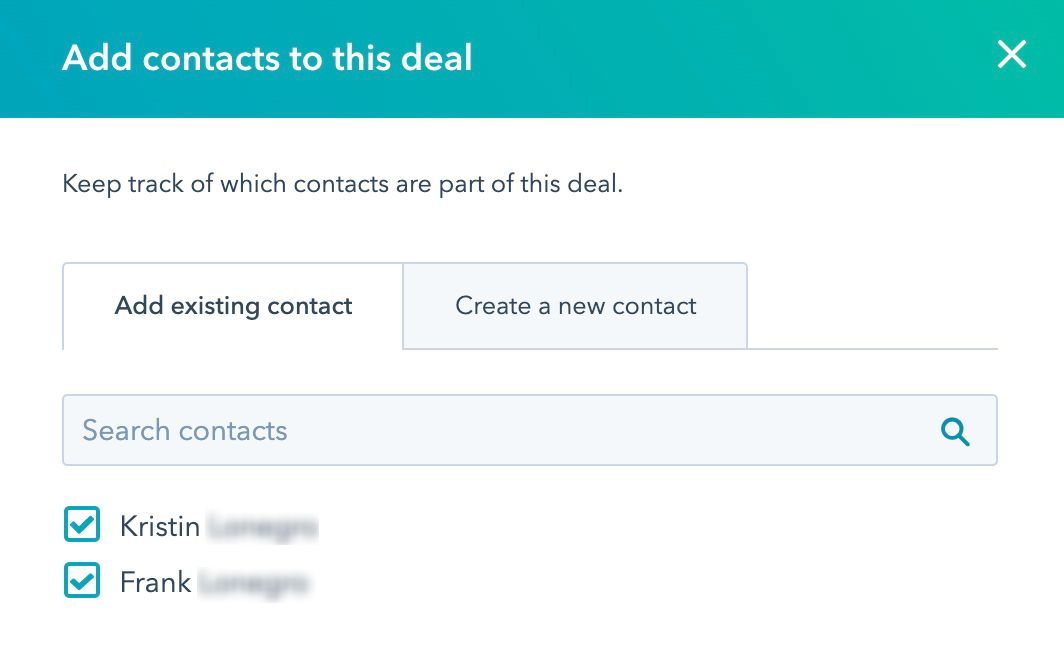 How to use the HubSpot deal pipeline

Within the pipeline, you can set all kinds of filters to narrow your view. For example, you can filter only deals whose owner (or admissions office) is a particular person: 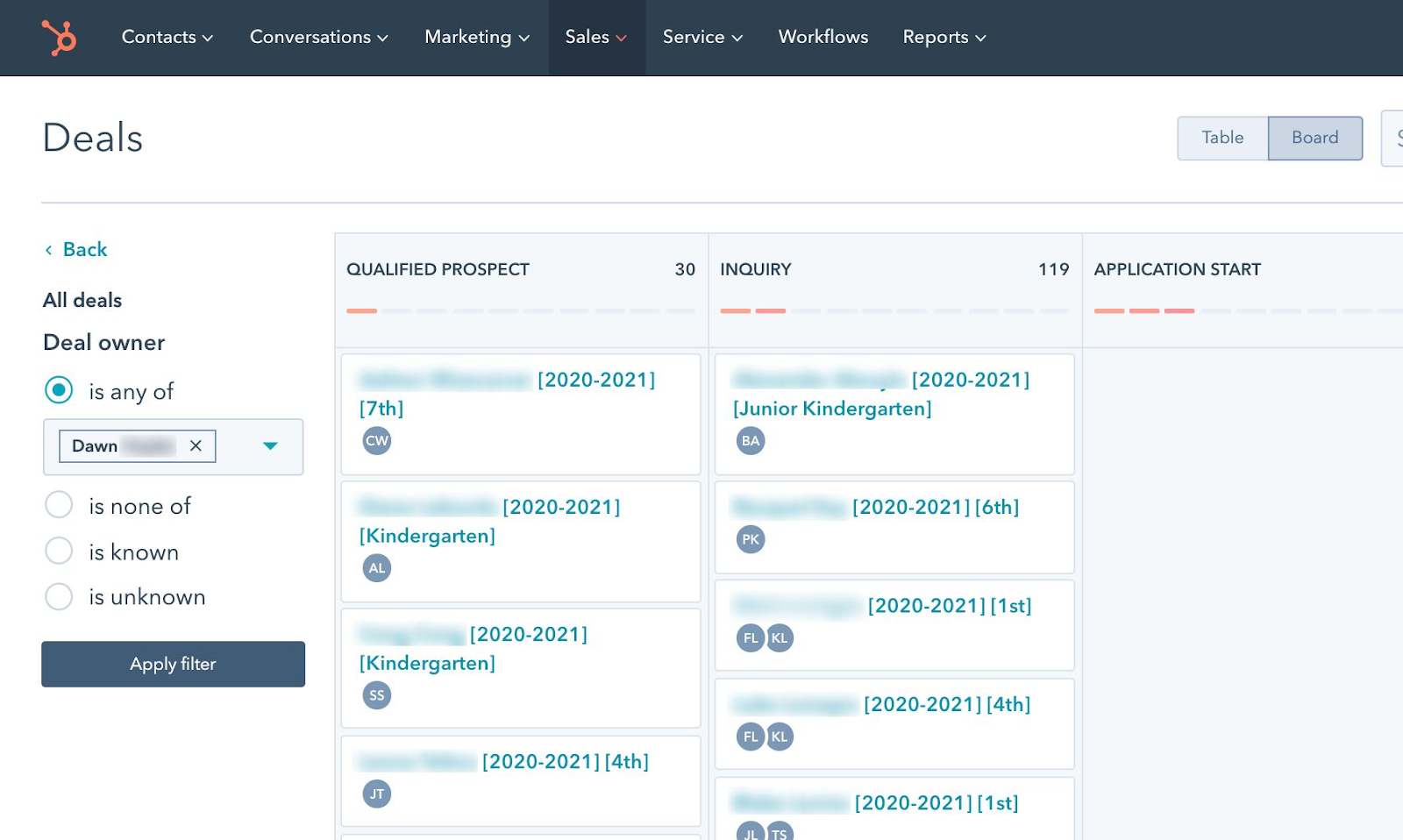 You can also click and drag any deal between deal stages, add notes within a particular deal, or trigger specific tasks for each deal or deal stage. For example, once a deal reaches the inquiry deal stage, you could automatically trigger a task that goes out to the deal owner informing them to personally reach out. With HubSpot’s Sales Tools Add-On, you can email or call deals/contacts directly from HubSpot so that HubSpot maintains a complete log of your communication history. HubSpot even lets you schedule meetings with your contacts/deals.

You can use HubSpot’s reporting dashboards to create custom reports to show you how many deals you have at each stage of the pipeline broken down by admissions counselor. 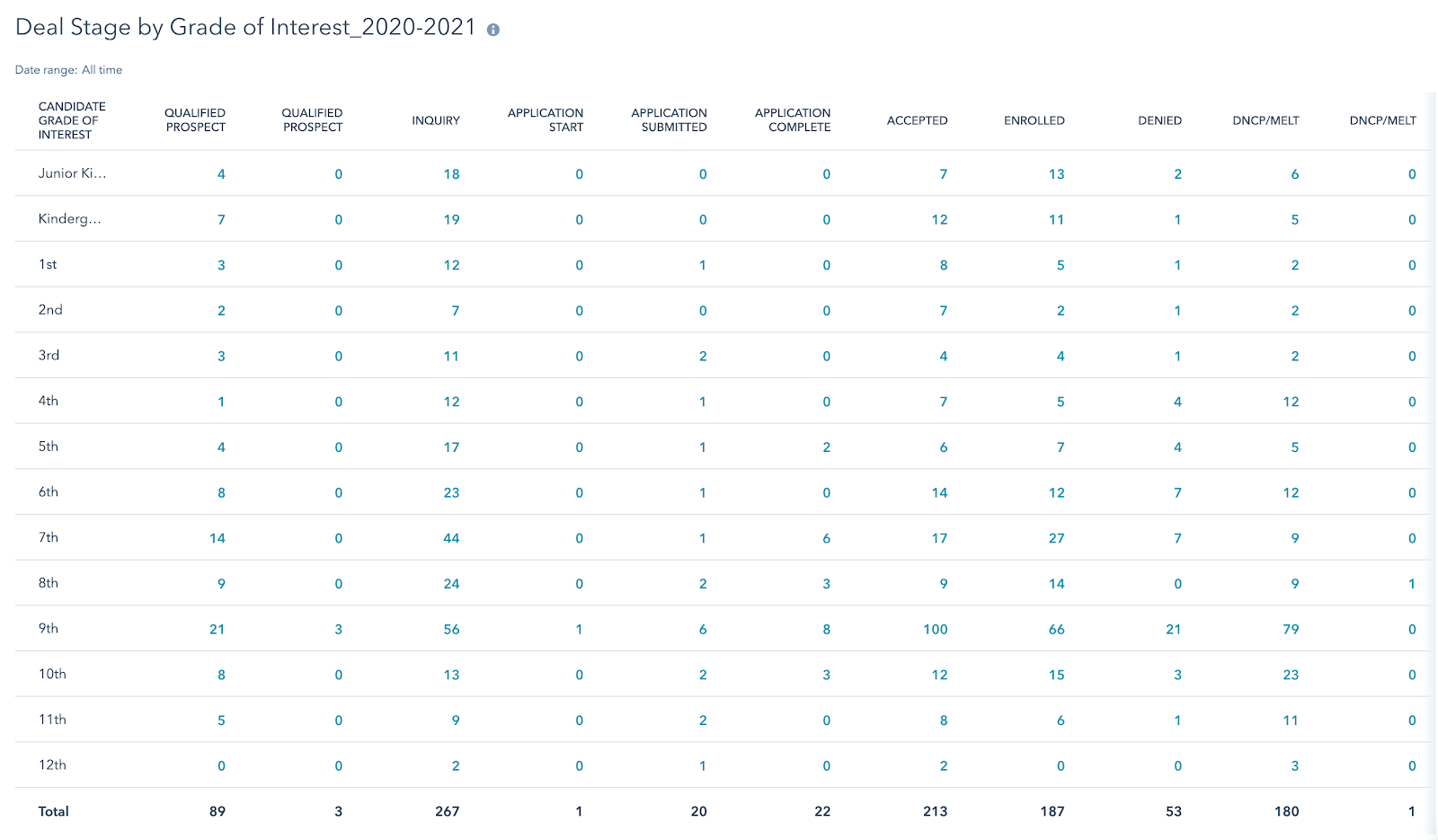 1. You can create lists of contacts based on associated deal information.

Let’s say you want to send an email to parents of prospective middle school students. You can create a contact list using deal association logic specific to the deal stages: 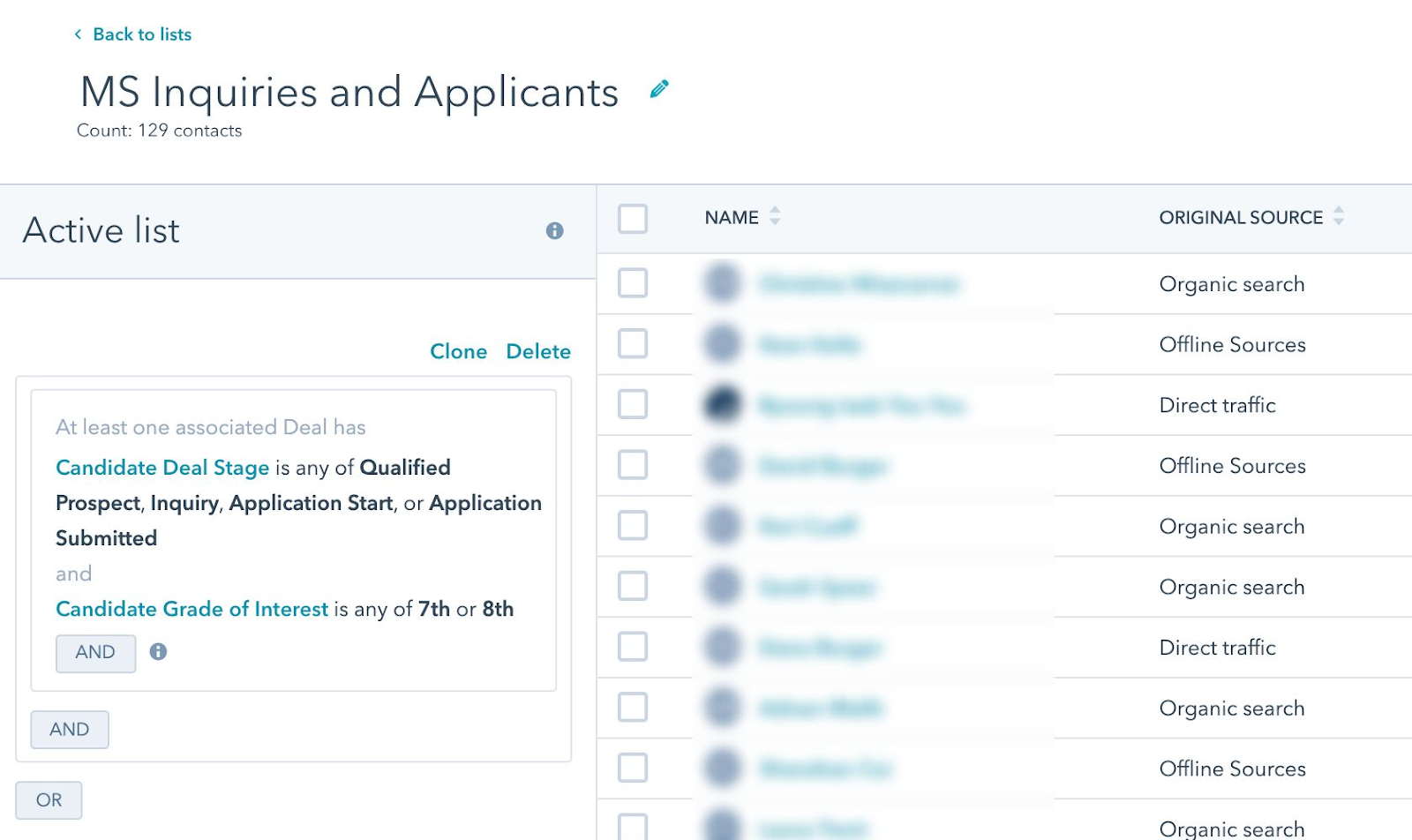 2. If you encounter duplicate deals, you can merge them and retain deal history of both original deals.

Within the deal detail page, click the Actions dropdown in the upper left corner and select Merge. Then, you’ll be prompted to select the other duplicate deal to merge the two. If you want more sophisticated automation, an integration with Zapier can allow for creation of deals ONLY when they don’t already exist in the pipeline. Based on contact behavior, Zapier can also allow for the automated movement of deals between deal stages (ex: a contact submits the inquiry form and the deal automatically moves from the Qualified Prospect deal stage to the Inquiry stage).

Looking for help? Connect with us.

If you have any questions or if you’re interested in getting a quote for customizing your HubSpot database, don’t hesitate to reach out to us at tech@directdevelopment.com!

Want to increase your organic search rankings? Sign up for our SEO Strategy Cohort to make a game plan.

Return to The Enrollment Marketer 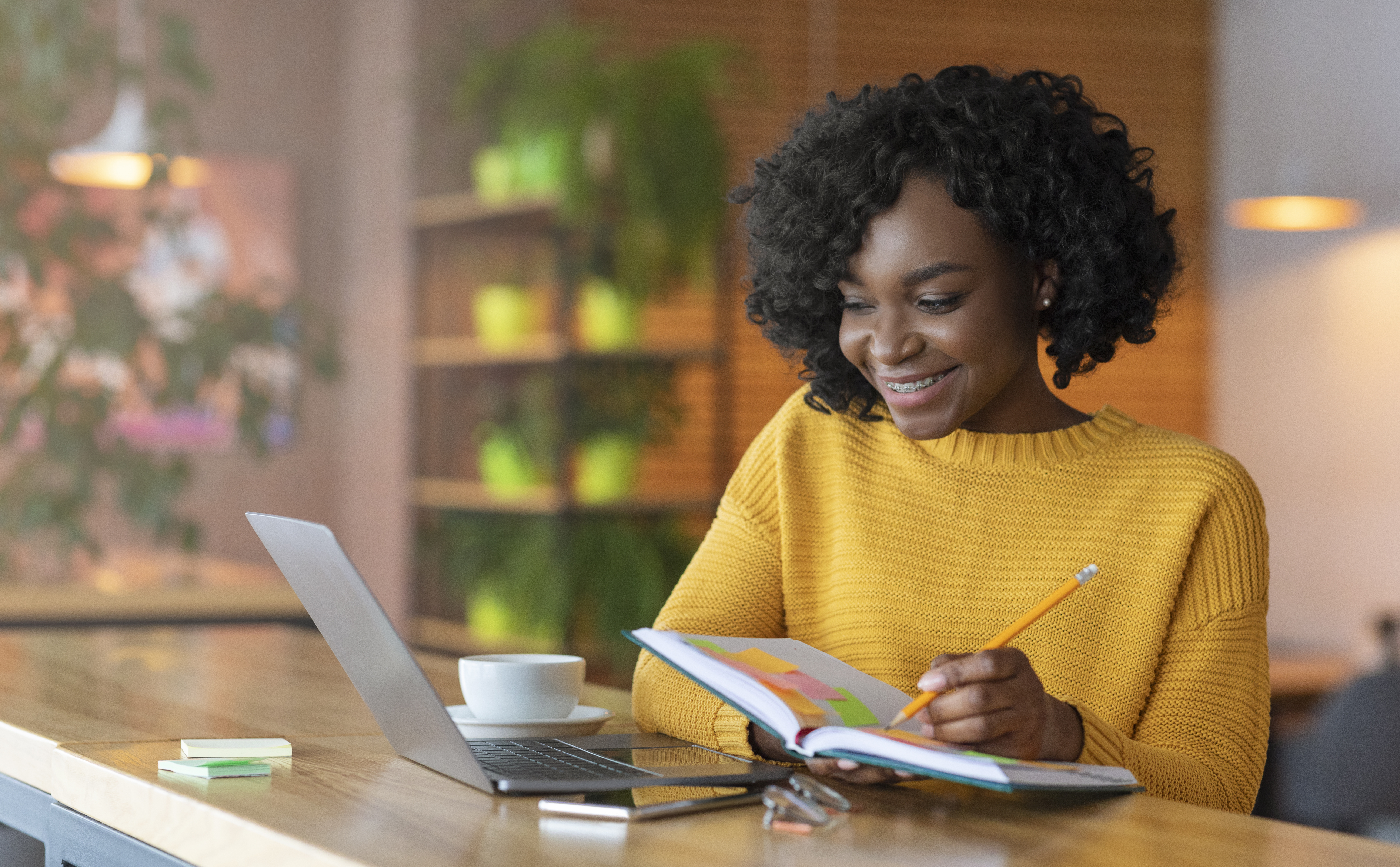 How to Recruit Students Online: 3 Impactful Enrollment Marketing Tactics for 2022

Enrollment marketing has always been a... 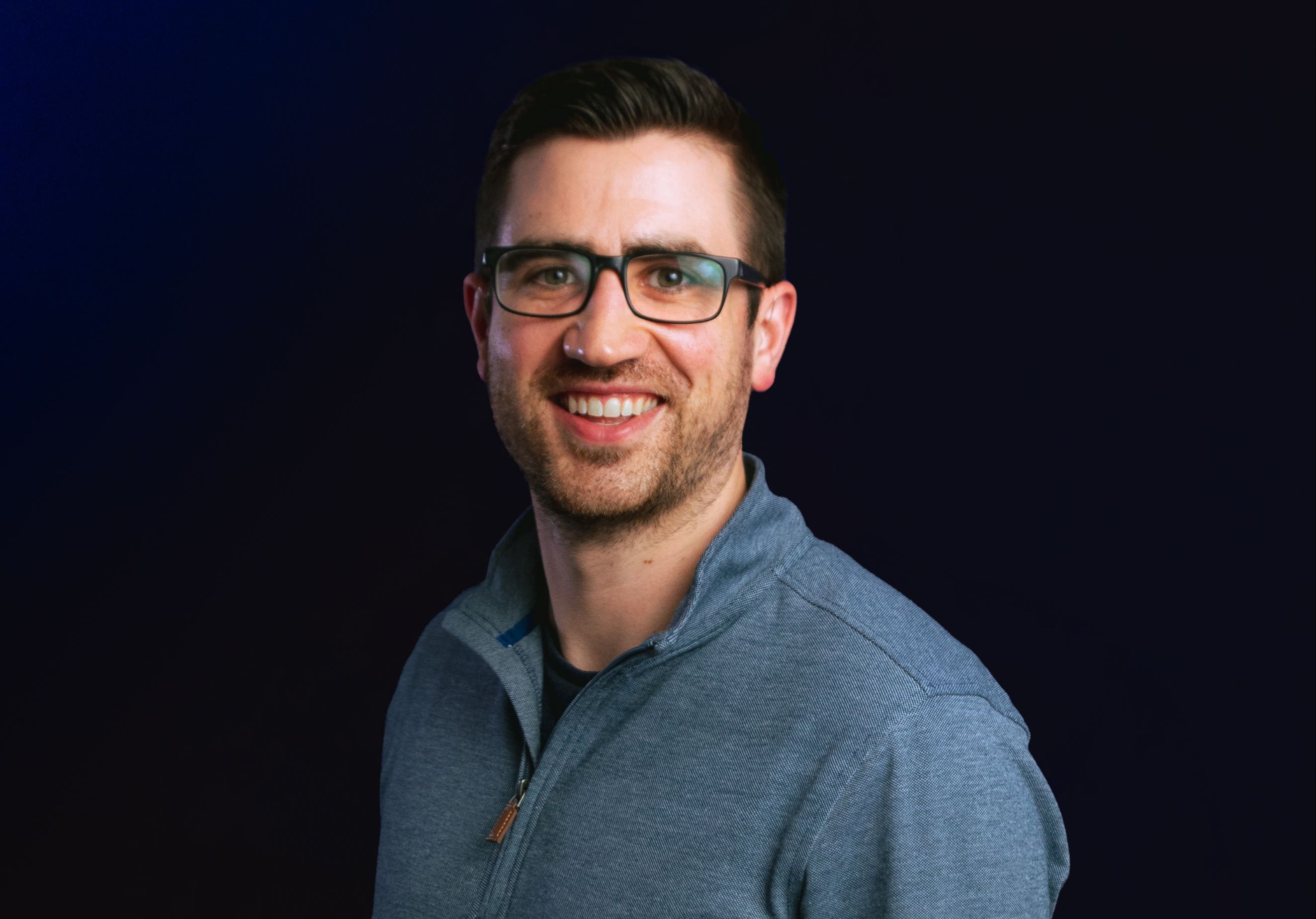 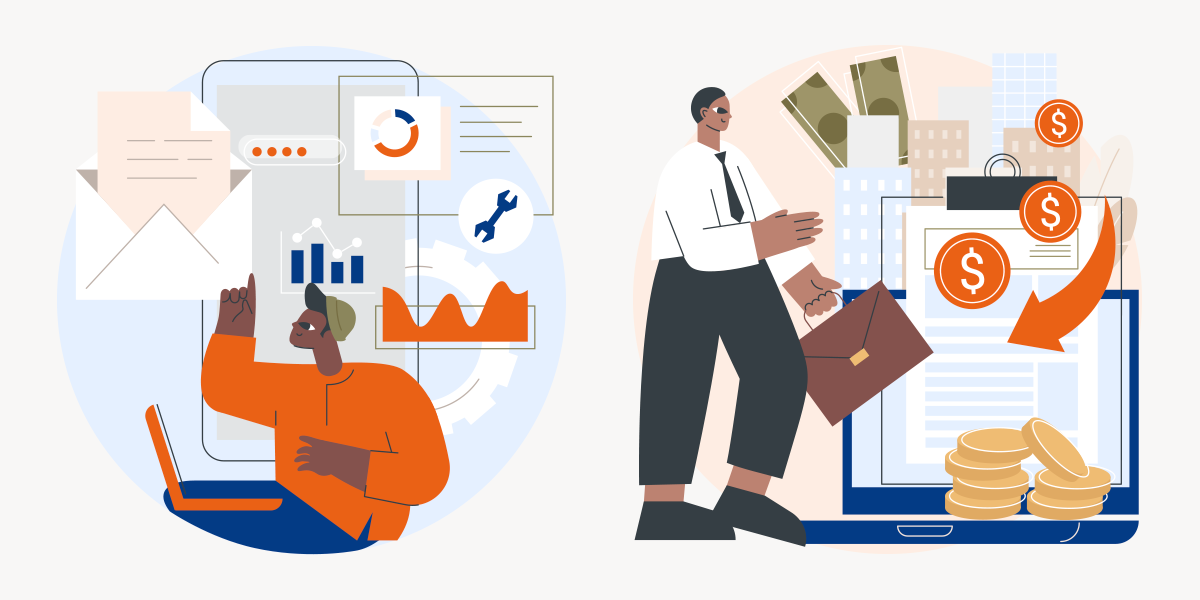 What Do Marketing and Debt Payoff Have in Common? 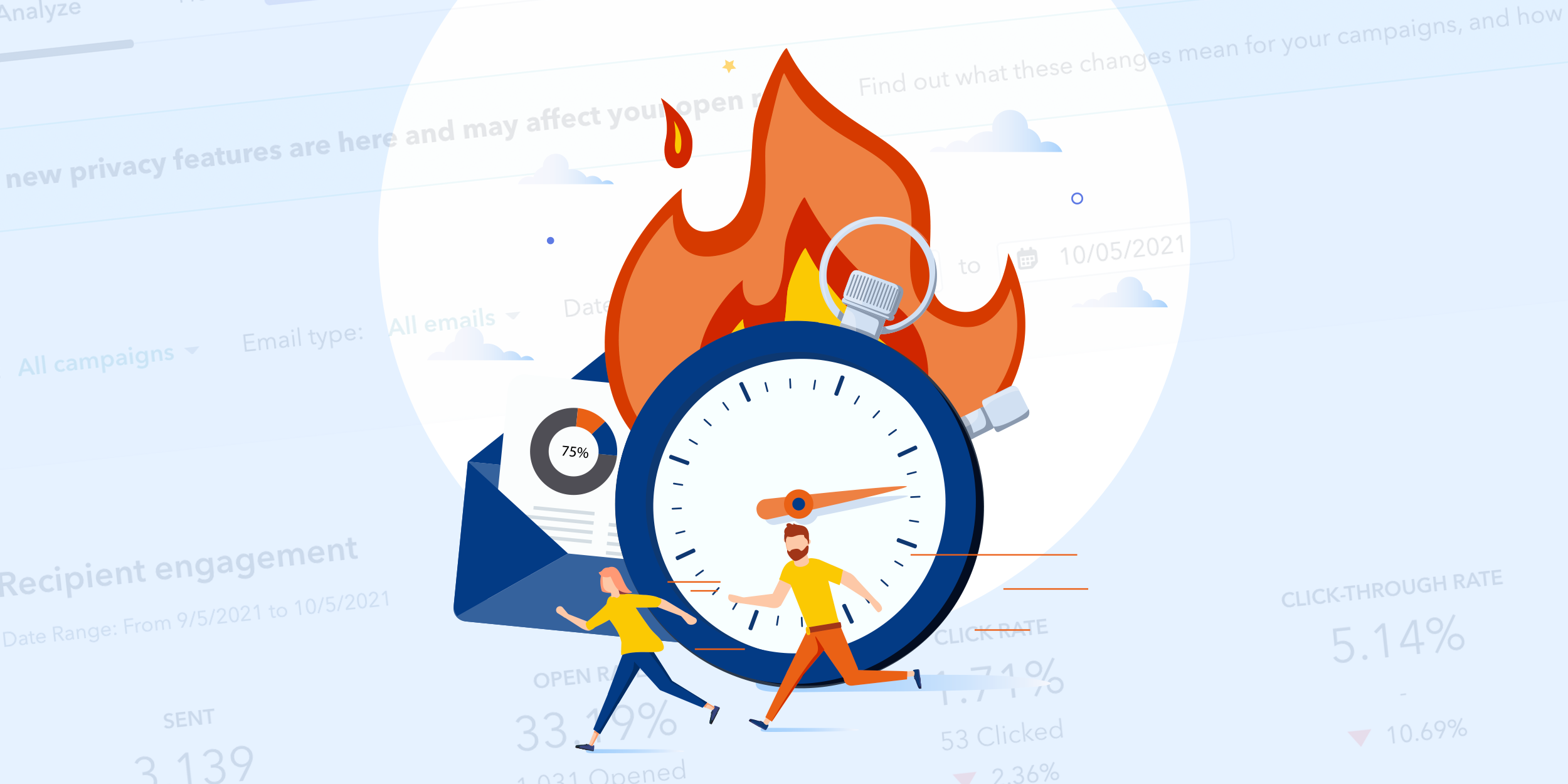 [On-Demand Webinar] How to Adapt & Improve Your Email Strategy

As a digital marketing agency, we’re always on... 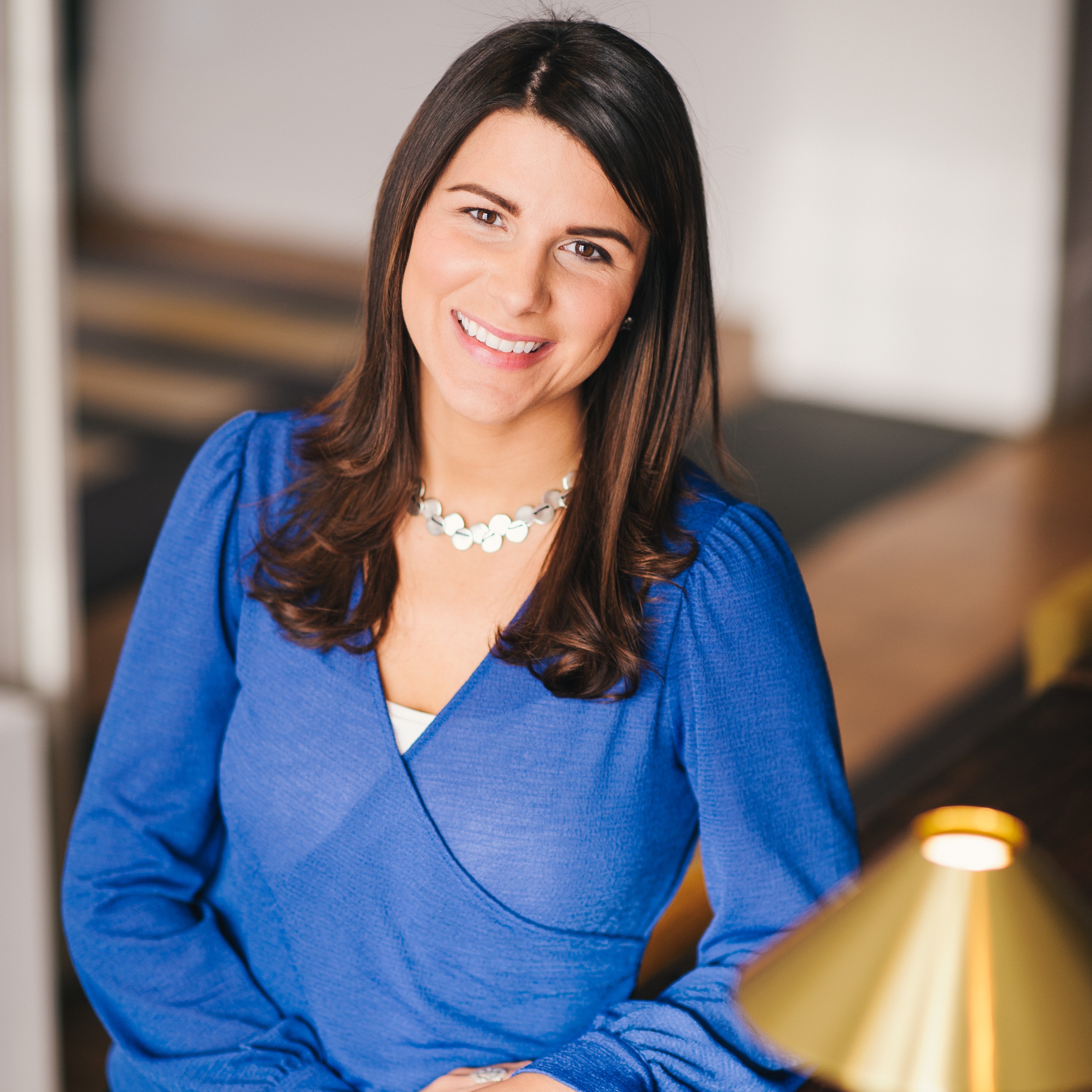