The Power of Personas: The Best Way to Make Money from a Nonprofit Website

All of us in the nonprofit world have a cause or mission we can talk anyone’s ear off about, if only given the chance and a captive audience. If you are reading this, it’s probably because you have a mission you are passionate about, too.

Figuring out how to make money for your cause, on the other hand, is likely a different story.

But did you know that your ability to talk and write with passion about all kinds of facets of your cause might just be your best way to raise funds? Did you know that content alone may help you make money for your cause from a website?

It’s true, but most people don’t see a lot of return from their website. That’s because they make lots of serious mistakes trying to bring traffic in.

Sure, I could give you a top ten list of some of those mistakes. But no doubt your to-do list is already too long. So instead, let me give you just one powerful thing you need. Doing this one thing will help you avoid a whole slurry of mistakes everyone else is making.

So here’s that one powerful thing: you need to know how to use personas.

What Is a Persona?

The idea of personas comes from Alan Cooper, one of the first pioneers of the kinds of software and programming languages that businesses use every day. Back in the 1980s, it was Cooper who first saw that programmers were creating bad software because they didn’t start with the real people who needed to use their products.

The fix? Alan Cooper simply created a profile of a fictional person, but one based on the way real users or customers wanted to use a product. He added a profile picture. Then, he asked the programmer how “Cynthia,” the finance person, would use the software.

Ever since, the idea of a persona has been more or less the same: take a segment of people who interact with you; capture patterns about what they want, what their goals are, and what their problems are; and roll it all into a semi-fictional persona. Then, role play to figure out how you can solve your persona's problems and meet her goals.

What Makes a Persona So Powerful?

Using personas helped make Alan Cooper very wealthy. But what makes them so powerful, and how can they help your website make money for the cause you care about?

Three things make a persona super powerful for your website: their relatability, their concreteness, and their behavior-focus. Let’s take those three things in turn, and talk about this real persona that Rick Warren used to start Saddleback Community Church while we’re at it.

Let’s face it: we’re relational creatures. There’s something about a real person and a real face that ignites the imagination in ways that complex statistics or facts never will.

The secret to why relatability trumps anything else is this: our natural ability to put ourselves in someone else’s shoes. This natural ability allows us to imagine how a person will experience a multitude of factors and hone in on the key things that are actually relevant to their situation. Rick Warren’s “Saddleback Sam” persona allowed him to hone in on a few critical things that seekers in his area wanted, which came together in a large and informal environment that had more of the feel of the corporate worlds they felt comfortable in than a traditional church.

For your blog, relatability will help you imagine exactly what kinds of articles your persona might read. Is your persona a millennial applying to colleges? “Ten Volunteer Gigs Colleges Can’t Refuse” might draw your market much more than “10 Reasons to Attend our Fundraising Dinner.”

The relatability of a persona will ensure you won’t confuse ways that different kinds of people might want out of your blog or website, and create the same kind of cohesive experience that Rick Warren did with “Saddleback Sam.” And this leads us to the next thing that makes personas so powerful: concreteness.

You’ll write differently if you have just one person in mind. Writing done with groups of people in mind is boring, and writing with a demographic in mind is even more boring. If you write directly to a particular person, you’ll naturally write well.

I know, it’s tempting to write for a crowd because you don’t want to miss some key donor just waiting out there. But the paradox is this: if you stop worrying about who you’re missing and instead write for particular people, there will be a lot more people who connect with what you write, too.

I remember reading an interview with a rock artist who wrote something like, “I was always surprised when people would really relate to a song, because that song came from a deeply personal place that no one else could possibly share… but then my wife pointed out that I often connected to the songs of the artists I’ve always loved the same way.”

The power of a persona is that it ends up being a wide net without having to actually cover all the ground in your target markets, which is why it’s okay to have a few personas. If your donors represent a wide spectrum of different age groups, space the ages of your personas out. They shouldn’t cover all the brackets. A few personas that are wildly different enough from one another will capture potential donors in lots of the in-between spaces.

Saddleback Sam doesn’t capture much of the actual demographic in the area Rick Warren was targeting; even Rick Warren’s church is certainly not filled with Saddleback Sams. But his concreteness did make Rick Warren’s early efforts resonate with a lot of people, and the results are clear.

Finally, personas are powerful because they draw your focus on particular behavioral patterns with razor-sharp clarity.

Remember Alan Cooper? His personas worked because they helped programmers and engineers predict how people would want to use their software, and they designed it for those behaviors. This is why it’s important to talk about a persona’s goals and problems. If you can help them meet their goals, they’ll stay with you forever.

The same is true at Saddleback. Rick Warren knew how to predict what would keep visitors once they came through the door and what would turn them away. Your blog works that way, too: once you know a person’s goals and main problems, write to solve those problems and help them meet those goals. Do they seek adventure and experience? Write about how volunteering abroad with your nonprofit can provide both! Are they leary of nonprofit overhead and whether money will be used right? Write an expert post about red flags that say a nonprofit may not be trustworthy, or how to choose one that will maximize the impact of their donation.

So begin the conversation: develop a persona (or several), and start writing with them in mind. You may just be surprised by how simple an idea can have great results for your nonprofit fundraising! Sister Georgette Lehmuth Turns Fundraising on Its Head at NCDC 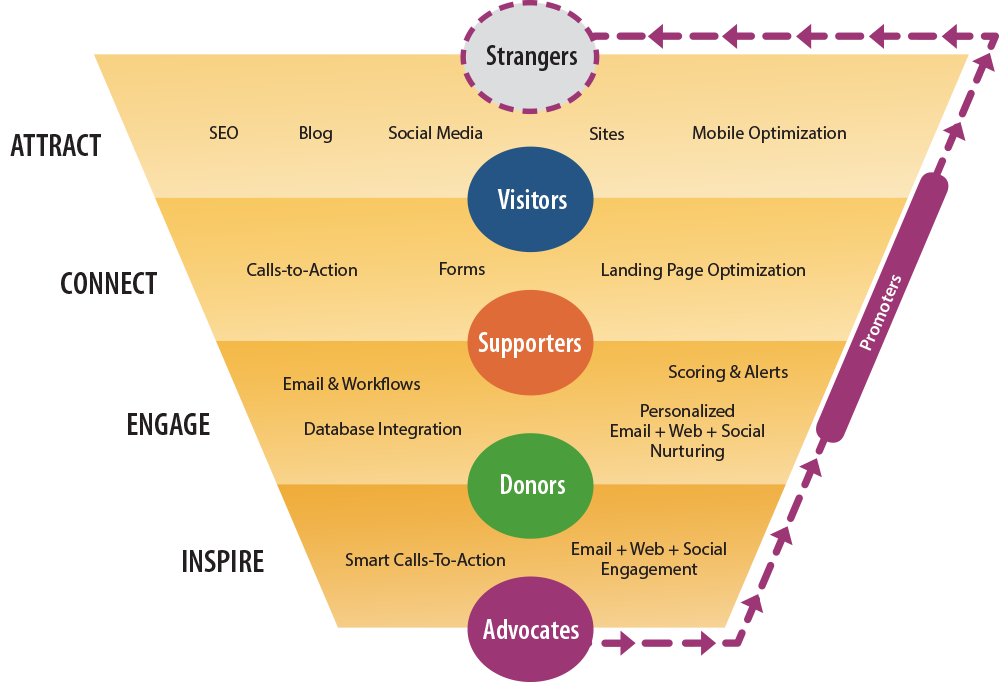